Mdm Halimah Yacob
President of the Republic of Singapore 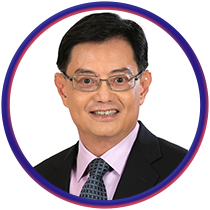 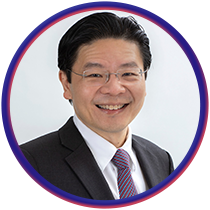 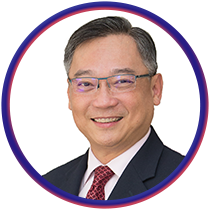 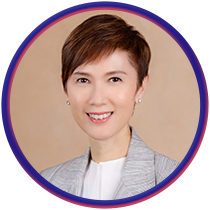 Josephine Teo
Minister for Communications and Information
Republic of Singapore 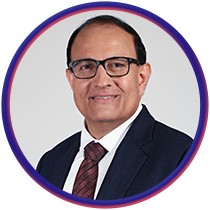 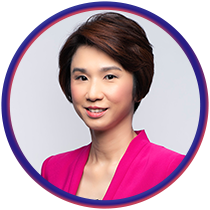 Mr Wong co-chairs the Multi-Ministry Taskforce on COVID-19, and is the Deputy Chairman of the Monetary Authority of Singapore (MAS). He is also a member of the GIC Board; the Future Economy Council; the Research, Innovation and Enterprise Council; and the National Research Foundation Board; and co-chairs the Singapore-Shanghai Comprehensive Cooperation Council.

He chairs the PAP Community Foundation and contributes to the labour movement as Chairman of the Singapore Labour Foundation, and Advisor to the Union of Power and Gas Employees.

Beginning his career as a civil servant, Mr Wong had worked as the Chief Executive of the Energy Market Authority and the Principal Private Secretary to Prime Minister Lee Hsien Loong. At the community level, he was involved in youth work in the church and voluntary organisations.
Mr Wong was educated at Tanjong Katong Secondary School and Victoria Junior College. He obtained his Bachelor’s and Master’s degrees in Economics from the University of Wisconsin-Madison and the University of Michigan-Ann Arbor. He also holds a Master’s degree in Public Administration from the Harvard Kennedy School.

Ms Low Yen Ling was elected as a Member of Parliament for Chua Chu Kang GRC in the 2011, 2015 and 2020 General Elections. She is presently the Minister of State for the Ministry of Trade and Industry (MTI) and Ministry of Culture, Community and Youth (MCCY). In addition, Ms Low is Chairperson of the Mayors’ Committee and Mayor of South West District.

Mr Iswaran is currently the Minister for Transport, with responsibilities spanning land, air, and sea transport. His key focus areas include rebuilding the Singapore air hub and the safe reopening of air travel amid the COVID-19 pandemic; strengthening Singapore’s maritime hub; and building a reliable, sustainable, and inclusive land transport system. Mr Iswaran is concurrently Minister-in-charge of Trade Relations at the Ministry of Trade and Industry, where he oversees various bilateral and multilateral trade negotiations.

Minister
Ministry of Communications and Information

Minister-in-charge of Smart Nation and Cybersecurity
Republic of Singapore

Minister Josephine Teo was appointed Minister for Communications and Information and Minister-in-charge of Smart Nation and Cybersecurity on 15 May 2021. She is also a member of the National Jobs Council and the Future Economy Council, and has been concurrently the Second Minister of Home Affairs since May 2018.

Mrs Teo was the Minister for Manpower from May 2018 till May 2021. She previously served in the Prime Minister’s Office and the Finance, Transport and Foreign Affairs ministries.

A member of Parliament since 2006, Mrs Teo was formerly Chairman of the Government Parliamentary Committee for Education and Assistant Secretary – General of the National Trades Union Congress (NTUC). Mrs Teo was concurrently Chief Executive Officer of the not-for-profit organisation Business China.

An alumna of Dunman High School and Raffles Junior College, Mrs Teo graduated from the National University of Singapore, winning several honours including the Rachel Meyer Book Prize for being the Best Woman Student. She obtained a Master of Science in Economics from the London School of Economics on scholarship from the Economic Development Board.

She is married and has three grown-up children. She enjoys creating memorable experiences for family and friends.

Mr Heng chairs the tripartite Future Economy Council which oversees the on-going restructuring of Singapore’s economy, through upgrading workers’ skills and industry transformation, to create better career prospects for the workforce He leads a team to oversee the design and implementation of national strategies in areas such as skills and capabilities development, innovation and productivity as well as the internationalisation of Singapore companies.

He is also the Chairman of the National Research Foundation, which sets the direction for Singapore’s research, innovation and enterprise (RIE) strategies. Mr Heng is overseeing the closer integration of our RIE and industry transformation efforts.

Mr Heng served as Minister for Education from 2011 to 2015. He also led the year-long Our Singapore Conversation from 2012 that helped to engage more than 47,000 Singaporeans from all walks of life through dialogues.

He also served as Minister for Finance from 2015 to 2021, overseeing ten national Budgets including an unprecedented five Budgets to support Singaporeans and businesses through the COVID-19 pandemic in 2020. Mr Heng was awarded the NTUC Medal of Honour in 2021 for his contribution to the labour movement.

Mr Heng has an MA in Economics from Cambridge University. He also holds a Master in Public Administration from the Kennedy School of Government, Harvard University.

Mr Gan Kim Yong was appointed Minister for Trade and Industry on 15 May 2021. One of his key priorities is to identify new growth opportunities in support of Singapore’s continued economic development. Mr Gan continues to co-chair the Multi-Ministry Taskforce to direct and coordinate Singapore’s COVID-19 response.

From May 2011 to May 2021, Mr Gan was Minister for Health. He oversaw efforts to drive Healthcare 2020, a masterplan to ensure accessibility, quality and affordability of healthcare in Singapore. Under his leadership, the Ministry of Health invested significantly in building new healthcare infrastructure, and expanded the polyclinic and General Practitioner networks. Enhancements to long-term care financing measures were also launched, and a universal lifelong medical insurance was introduced.

As Minister for Manpower from April 2008 to May 2011, Mr Gan led the ministry’s efforts to minimise mass retrenchments during the economic recession in 2009. He also played an instrumental role in the development of manpower policies to meet the challenges of a rapidly changing business environment, and in building a Continuing Education and Training system for a globally competitive workforce.

Mdm Halimah Yacob was sworn in as the 8th President of the Republic of Singapore on 14 September 2017.

Mdm Halimah Yacob served in the National Trades Union Congress for 33 years. She held various positions, as Deputy Secretary General; Director of departments including Legal Services, Women’s Development and Labour Studies; and Executive Secretary of the United Workers of Electronic and Electrical Industries. She was on various national committees including the Economic Review Committee.

She was Singapore’s representative in the International Labour Organisation for 12 years and the first Singaporean to be elected into the ILO. She represented workers in many ILO committees.

In 2001, Elected as a Member of Parliament for the Jurong Group Representation Constituency. Her final and fourth term as an MP was in the Marsiling-Yew Tee GRC.

In 2011, Appointed Minister of State for Community Development and Sports. She introduced various programmes for seniors and enhanced services for the disabled. She also laid the foundation for the Social Services Offices.

In 2013, Elected as Speaker of Parliament, the first woman to hold the position.

With her passion for social causes, Mdm Halimah is patron to more than 40 charitable and community organisations. She also championed women’s issues and was awarded Woman of the Year by Her World Magazine (2003) and AWARE Heroine Award (2011). She was inducted into the Singapore Women’s Hall of Fame (2014) and conferred the Berita Harian Achiever of the Year (2001).

Mdm Halimah obtained her law degree and Masters in Law from the National University of Singapore. In 2016, she was conferred the Doctor of Law by the NUS.